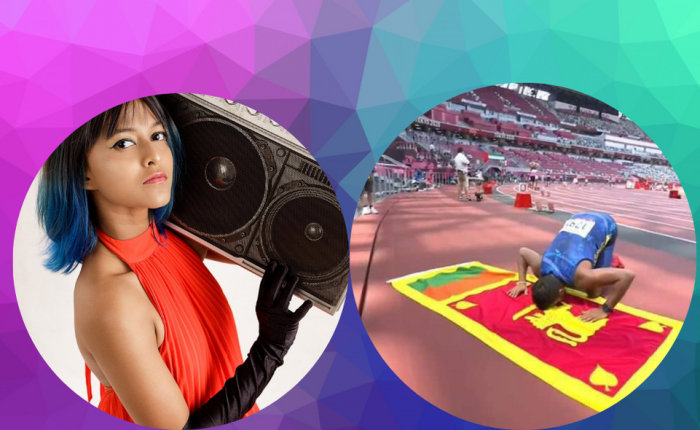 In the midst of a pandemic that’s stealing more lives than ever before, sanity needs prevailing…the kind of sanity that would help us overcome this and go back to the lives we had once taken for granted.

There’s nothing we need right now more than good news.

The kind of news that help us understand and celebrate being who we are – in the midst of the overfilled crematoriums, hapless patients struggling for oxygen and the healthcare workers overworked to the bone.

News that would be uplifting as over a million self employed people struggle to make ends meet – as many have no choice but to resort to eating one meal a day during the lockdown because they cannot go to work.

Last week, Yohani showed us that good news can come in many forms.

Her staggering over 40 million views mammoth achievement with one YouTube video not only captured the world but also captured all of us.

She has gone where no Sri Lankan singer/performer has gone before.

But not before teaching us many lessons that are comforting and inspiring – even in the midst of the darkness of the pandemic.

She showed us how it can be done – without fanfare, without criticism and without naysaying which seems to be a national pastime.

She just did what she did. Kept on singing and performing until that moment in time when her talent and her commitment just cut through the noise and made it to the Twitter page of a Bollywood legend – the rest is history.

This week, as Paralympic Games took off in Tokyo, Dinesh Priyantha Herath of the Sri Lanka Army who lost an arm in the war, took Gold in Men’s Javelin Throw, setting not only a new World Record but also showing his countrymen and women how you strike a win.

You don’t strike a win by punching the keys to criticise, spill hate or troll something or someone. Sure it helps to vent out but what beyond that?

It may give you a temporary high but minutes later, you are back at what you do best when you choose that road – living a miserable existence that goes nowhere. Everything can and will go wrong – would you still have the courage to stand up and say no, it cannot get me down?

Yohani and Dinesh have shown us that even in the midst of adversity, life needs – and can be celebrated.

It’s moments like what they have given us – by taking Sri Lanka to great heights globally – that can help us heal and come together as a nation.

If we don’t and we choose to wallow in our self-pity of broken systems that need fixing, we are taking the road that will never end but drive us even further into despair.

Maybe it’s the impact of the pandemic – of losing loved ones – the numbers have become names now – of the fear of the unknown, the fear of being infected and the sheer impact of losing livelihoods and income.

Maybe it’s not knowing where this pandemic will take us and not being able to truly comprehend what’s going on.

Maybe it brings out the worst in normally good people on social media or in person, losing it at vaccination centres and grumbling daily at what could be better.

Yes we have many broken systems that need fixing – everyday, all the time.

But we don’t have to be a part of it – we don’t need to allow ourselves to break down.

The human spirit is capable of rising above the situation, above the circumstances and achieving greater heights right in the middle of despair.

Others have shown us before – there have been many stories.

From Connie Ten Boom who survived Nazi atrocities to reach out to those hurting at the end of the World War Two to the mother of the Egyptian Christian Martyr who was beheaded by the ISIS.

They chose not to stay deep in hate and wallow in self-pity. They rose above what happened and went on to make the world a better place.

We can do that too.

Yohani and Dinesh have shown us it can be done.

It is never too late, never too far gone that you cannot reach out and touch someone’s life and make it better.

Maybe not much – a phone call, a hot meal or even a mild query.

A little kindness goes a long way – and helps us understand that no matter how bleak things might become, there’s still hope.

” I cried for a pair of shoes until I met a man without feet.”