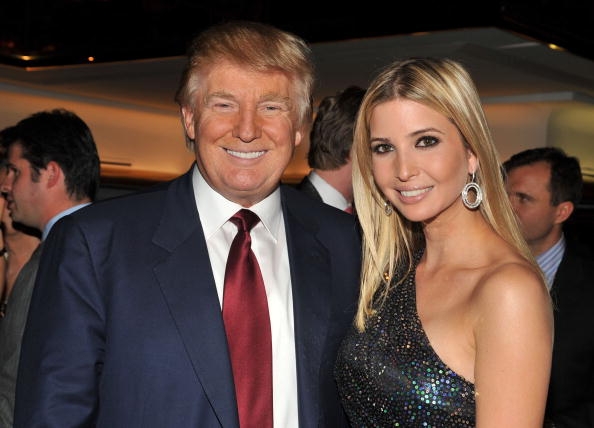 There has always been something special between fathers and daughters.

I realized that early on. A fully fledged Daddy’s Girl, the highlight of my life was when my father would take me every last week of the month to the Lake House Bookshop and together, we would buy books. Even today, I can close my eyes and smell the sweet fragrance of new books in that wonderful book store all those years ago.

Today, watching my daughter with my husband, the close bond they share, brings back memories of the father-daughter connection that lasts a lifetime.

Today, the citizens of the United States of America elected their President for the next four years. Donald Trump defied all odds and proved the pundits wrong to capture the seat of the most powerful individual in the world ; he was a true winner in the eyes of his voters. But in the eyes of Ivanka, his daughter who led the front lines and was always by his side, he will always be her father,  her true hero.

I remember a picture from the early days of their campaign – the camera captured her adoring eyes, her admiration for her father who let’s face it, built a successful empire on his own. She has chosen to wear the Trump laurels well, succeeding with her own brand of clothing and serving on the board of some of the companies of her father’s business empire. In a recent interview, she told media that she was indeed glad that not one of the Trump children had turned out to be a social liability.

In contrast to other campaigns and other contestants, Ivanka was the constant face beside her father in the election campaign, graciously given the passenger seat by her step mother Melania. It was a sweet moment to watch the daughter beside the father – through the nail biting campaign, through the mud, the accusations, the take downs. Ever the dutiful daughter, she never wavered but stood firm in her conviction that her father was what America needed.

Not even when a few Hillary supporters chose to attack and boycott her brand, Ivanka chose to stay put and do everyday things, holding her peace. A mother and a wife and a role model in her own right, Ivanka’s devotion to her father and her belief in his capacity to lead their country, cut through it all. Here was a daughter who was standing by her father’s side. If nothing else, it bode well for everything The Donald meant to the everyday, middle America that the Hollywood pundits and Washington DC number crunchers did not care to give any credit to.

There’s something that’s credible about such a father daughter relationship ; it is not orchestrated. Her presence by his side may have reassured the voters that here was a father-daughter duo who were, celebrity status aside, just like the millions of families who wanted to vote right. It was not a well put together show nor one of Washington’s seasoned career politicians in a sassy PR act ; the honest sincerity in Ivanka’s presence by her father’s side would have convinced a million Daddy’s Girls to vote for her father.

The media have used words like quiet resilience and under stated elegance to describe the woman who would soon be America’s First Daughter. She has been identified as his closest advisor although she has tried to downplay the role. To her credit, Ivanka made it a point not to outshine her stepmother Melania. They stood side by side, flanking the man they both love, two elegant women always dressed right. Trump women were not known for their flamboyant taste and outlandish fashion sense – that is definitely more Michelle Obama territory. Ivanka and Melania have chosen to make elegant but firm statements about who they were and where they were grounded.

Now that the world has recovered from the shock of seeing a non-political businessman capture the hearts of voters in the USA, it might be time for us to move on.

But not before we celebrate the daughter behind the father. All the way.